More Power to the Students 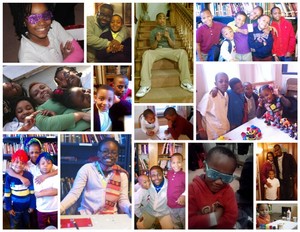 When Shawn came to St. Francis Neighborhood Center two years ago, he was failing the fourth grade.  He was a bully at school.  And he was generally angry at the world and uncomfortable in his own skin.  What he needed was to be given back the power to choose his own direction in life – essentially, the mission of The Power Project, a youth development program at St. Francis.

The past two years in The Power Project have helped Shawn to regain his self-confidence.  Surprisingly, he now breezes through his math lessons, thanks in part to his mentor in The Power Project, a Ph.D. candidate in mathematics at Johns Hopkins University.

The Power Project began two years ago with a $30,000 grant from the Knott Foundation and recently received $45,000 from the Foundation earlier this year.  With 30 children, the program operates at full capacity and has a waiting list.

“Power is truly the formative word in this program,” shared Sarah Tarighi Murphy, Executive Director.  At The Power Project, the Center’s staff works with each child and his or her family to develop a Power Plan to identify a child’s Power Goal (their ultimate life goal; i.e., “I want to be a teacher”), short-term and long-term objectives, and the resources needed to achieve their goals.  Participants even eat a Power Snack – a healthy meal that the children prepare alongside volunteers once a week.

A Cornerstone of Reservoir Hill

For almost 50 years, St. Francis Neighborhood Center has been a cornerstone of Reservoir Hill in Baltimore City.  Founded by two Catholic churches in 1963 – both aptly named St. Francis – the Center began as a Catholic outreach ministry where young Jesuit priests were assigned to work.  Enter Father Tom Composto in 1965.

Father Tom became the lifeblood of St. Francis Neighborhood Center.  “He gave the word ‘service’ meaning,” declared Murphy.  “He lived it with every action and every word.”  Indeed, Father Tom was closely connected to the people of Reservoir Hill and kept his promise to serve them every day of his life.

Sadly, on March 16, Father Tom passed away at the age of 72.  More than 100 people attended his funeral in the chapel of St. Francis Neighborhood Center, with crowds spilling out onto the porch, into the street, and down the entire block.  Tom Hall, a resident of Reservoir Hill, voiced a touching tribute to Father Tom on NPR’s Maryland Morning:  “He’s not an ordinary man who did extraordinary things… He’s an extraordinary man who did ordinary things.”

Sarah Tarighi Murphy currently serves as the Executive Director of St. Francis Neighborhood Center.  After initially pursuing a career in the advocacy and public policy arena, she felt instinctively drawn to the positive and powerful feeling inside the walls of the Center.  Through her work, she witnesses how people change themselves every day as a result of the Center’s mission.

Being a young leader in the Baltimore nonprofit community, Murphy was honored to participate in the first cohort of the Leaders Circle, which the Knott Foundation founded in 2009 in partnership with Maryland Nonprofits and University of Baltimore.  The Circle consisted of nine Executive Directors who met monthly to problem-solve and share stories.  “It was amazing how so many different people from different organizations were dealing with the same issues,” expressed Murphy.

So, under bright new leadership, the mission of St. Francis Neighborhood Center to break the cycles of poverty continues.  And Father Tom’s legacy lives on in the seemingly ordinary, yet heroic, work that is done.  And Shawn, in The Power Project?  He is finally able to just be a kid.