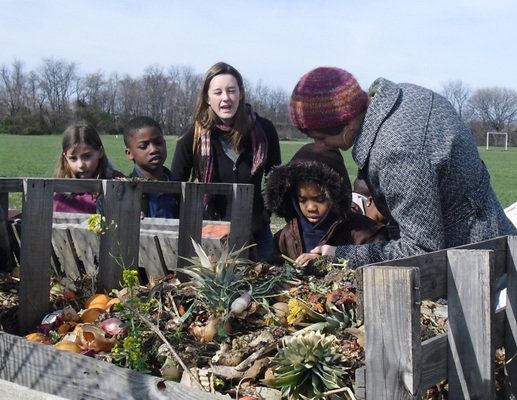 It took three tries for the fifth-grade students from Baltimore City’s Green Charter School to identify a component of Real Food Farm that actually cost the organization money.  Tyler Brown, or “Farmer Brown” as he is called by the kids, shared that Whole Foods and other companies deposit their trash at Real Food Farm to serve as composting material.  And the wood chips came from a tree company that otherwise would have taken them to the dump.  But the hoses, well, those did cost money.

Real Food Farm is a project of Civic Works, an organization focused on giving people meaningful opportunities to serve their community.  The Knott Foundation has supported Civic Works for a number of years, most recently awarding a $50,000 grant to the Real Food Farm Project in 2010.

From farming, to tutoring and mentoring, to learning how to construct a green, energy-efficient roof, Civic Works acts as a bridge between human capital and community needs.  While the majority of volunteers are in the 17-24 age range, the organization also employs elementary-age and senior volunteers, and they come from many different parts of the country.

On a sunny April afternoon amongst fields of freshly planted garlic, onion, carrots, and spinach (and four scarecrows!), a group of high school volunteers from Detroit was helping to build a hoop house.  A hoop house is basically a low-cost greenhouse.  Real Food Farm has five hoop houses and hopes to grow that number to 20 in the future.  The hoop houses allow the Farm to cultivate fruits and vegetables year-round and therefore provide fresh produce to the communities of South Clifton Park, Darley Park, Belair-Edison, and Coldstream-Homestead-Montebello on a regular schedule.

Civic Works recently received a van that will be painted to feature Real Food Farm’s mobile produce market.  “The great thing about the Farm is that it not only provides fresh, organic produce to the local community, but it also reduces the transportation costs for the goods and provides an educational platform for kids to see how fruits and vegetables are grown and how they can be prepared in healthy meals,” stated Earl Millett, Director of Volunteer Services.

Founded in 1993, Civic Works is headquartered in Clifton Mansion, a structure dating back to the late eighteenth century that is still being carefully restored by Civic Works and the Friends of Clifton Mansion.  With additional resources, Civic Works plans to further renovate the Mansion in order to enhance its programs.  Even Real Food Farm would be able to use a renovated kitchen to expand its cooking classes, since not all residents of the neighborhood are familiar with how to prepare fresh produce and preserve the nutrients.

In the meantime, it seems that Civic Works is still operating at full capacity, and the volunteers just keep calling.  So many volunteers, in fact, that Millett explained he sometimes must find alternative opportunities for them with organizations such as Habitat for Humanity, Blue Water Baltimore, Paul’s Place, Baltimore Reads, or Baltimore City Recs and Parks.

If you call and happen to have any garden hoses, however, Civic Works will take them.