Baltimore’s Catholic Woman of the World 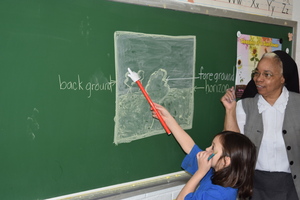 Sister Rita Michelle Proctor, OSP, serves as the Superior General of the Oblate Sisters of Providence, an order that she has been a part of for more than 50 years.  “I’ve come to understand that God calls us to different walks of life.  I felt called to religious life with the Oblates.  I remember being attracted by their sense of genuineness and hospitality,” she reflects.

About the Oblate Sisters of Providence

Formed in 1829, the Oblate Sisters of Providence are the first religious order in the Roman Catholic Church founded by women of African descent.  In the early years, the Sisters educated youth and provided a home for orphans. Slaves who had been purchased and freed were educated and, at times, admitted into the congregation.

Mother Mary Lange is the Order’s Foundress and was born in Santiago de Cuba in 1784.  Despite the racial hardship around her, Mother Lange began St. Frances Academy, a Catholic school in Baltimore City, and attracted African American women to join her as servants of God.

The order currently consists of approximately 80 Sisters in parishes and schools located in Maryland, New York, Florida, and Costa Rica.  Their Motherhouse is in the Baltimore area, where almost 40 Sisters reside.  “Our Sisters struggled to build this house,” says Sister Rita Michelle.  “They sold aprons to build it.  We are proud of that heritage and are glad to have a place to call home.”

The Knott Foundation awarded Oblates a challenge grant to replace the roof on their Chapel and Sacred Heart Hall, which are located at the center of the Motherhouse and serve the Sisters and community on a daily basis.  The Sisters more than doubled the Foundation’s grant by raising money from the Bunting Family Foundation, the Mother Mary Lange Guild, and the Sisters themselves.

“The roof was leaking.  We knew it would take a miracle to raise the money to fix it,” states Sister Rita Michelle.  She laughs remembering the Order’s 190th anniversary celebration where the Sisters creatively placed potted plants in various locations to catch the drips of water.

A path to sainthood

“I would describe Mother Lange as a woman of color, deep faith, great courage, and a desire to serve God’s people,” says Sister Rita Michelle.  “She trusted in God’s providential care, a trust that has permeated our community for 191 years now.  She also had an inner joy that could only come from God.”

As testament to that great faith, trust, and joy, Mother Mary Lange is being considered for sainthood.  Her life’s journey has been documented and is being examined by the Congregation of the Causes for Saints in Rome.

Dr. Camille Brown, President of the Mother Lange Guild, concludes, “Mother Lange is not just a Sister from Baltimore.  She is a Catholic woman of the world.”