A Partnership with Unbridled Potential 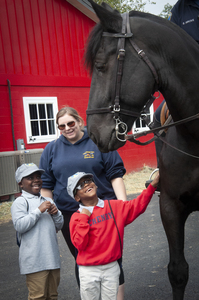 A class of kindergartners from James McHenry School walks out of the B&O Railroad Museum abuzz with excitement.  As the first school group to tour the First Mile Stable – an innovative partnership between the Museum and the Baltimore City Police Department – the children had spent the morning meeting horses and talking to Sargent Russ Robar, the head of the City’s Mounted Police Unit.

About the B&O Railroad Museum

The Baltimore & Ohio Railroad Museum is recognized as the birthplace of American railroading.  The Museum holds the oldest and most comprehensive collection of railroad history in the Western Hemisphere.

Located on a 40-acre campus in southwest Baltimore, the Museum is both a cultural anchor for the local community and a destination for more than 185,000 guests each year from around the world.  Tours include regularly scheduled train rides, demonstrations of historic equipment, access to the Museum’s fully operational restoration shop, admission to numerous galleries and exhibitions, and a robust educational program for school children that focuses on transportation, history, and innovation.

For the past three decades or more, the hard-working horses from Baltimore City’s Mounted Police Unit have lived in a former car dealership beneath a major highway in the City.  The B&O recently raised over $2 million to build a stable and paddock for the horses on their 40-acre campus, naming the project “The First Mile Stable.”  The term “First Mile” refers to its location where the first mile of long-distance rail was laid and the first passenger station was built.

Visitors to The First Mile Stable will enjoy talking to Sgt. Robar or one of his police officers, as well as meeting the horses themselves.  The Unit currently consists of four horses and four officers, but has the capacity to more than double in size in the future.  The Unit’s horses are selected for their ability to interact with people and to perform police work.  “Big D,” the lead horse for the Unit, has even received an international award for bravery and was just inducted into the Horse Star Hall of Fame.

“A major purpose of the project is to better integrate the police and the community through educational activities and positive bonding,” states Kris Hoellen, Executive Director.  She cites the First Mile Stable’s community classroom and demonstration area as resources for groups to spend time learning about the Mounted Unit and witnessing first-hand how the horses are cared for. School children will be exposed to equine studies, law enforcement, and transportation as potential career pathways.

“The whole project is a way to help reach into the community,” concludes Francis Smyth, Board Chair of the B&O.  “Our hope is to help spark community economic development for this area, act as a deterrent for unsafe activity, and ultimately bring more visitors to the B&O as a cultural anchor for the neighborhood.”