Home > Knott Blog > What We’re Reading: The Alternative: Most of what you believe about poverty is wrong by Mauricio L. Miller

What We’re Reading: The Alternative: Most of what you believe about poverty is wrong by Mauricio L. Miller

An absorbing case for the role of self-determination, trust and community to win the War on Poverty 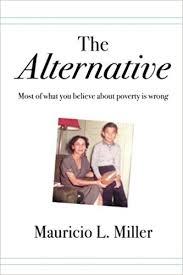 More than 50 years ago the War on Poverty was launched by then President Lyndon B. Johnson to “not only relieve the symptom of poverty, but to cure it and, above all, prevent it.” What has followed, however, has not eradicated or prevented poverty but, in the words of the author, merely made the condition of poverty tolerable.

Born to a single mother who came to the U.S. from Mexico to make a better life for her family, the author’s mother, Berta, worked tirelessly to build opportunities for her two children to live the American dream. And yet, as hard as she worked, Miller saw his mother’s efforts discounted and her worth diminished by people and programs that viewed her and others like her as weak, incapable, and in need of prescriptive forms of charity.

In The Alternative, Miller argues that the current state of philanthropy and the nonprofits it funds is based on a flawed premise that poor families are helpless and incapable of making the necessary choices to move themselves out of poverty without the assistance of an “expert” guiding, or in some cases dictating, the way.

What has resulted is a largely paternalistic system of programs that fail to recognize the grit, creativity, interests, work ethic and desire for self-determination of the poor. Running alongside of these programs is a system of federal policies that, while helpful in moments of crisis, do little to move and stabilize the poor once they make their way out of poverty and into what can be arguably worse – the world of the working-poor.

Miller’s book does a great job of providing qualitative and quantitative data to demonstrate his argument and builds an eloquent case for flipping the script using his life experiences as the child of an immigrant, a leader of “paternalistic” nonprofits, and the founder of the Family Independence Initiative (FII). FII is dedicated to ending the cycle of poverty by relying upon the expertise of the poor to create their own solutions; rather than leading with degreed expertise, it chooses to follow and reward the ingenuity and hard work that the poor are already doing to move and maintain themselves out of poverty.

The book highlights that while poverty is often painted as a permanent (and sometimes welcome) state, in reality, 75% of low-income families move themselves out of poverty in four years or less. But 50% find themselves below the poverty line again within five years. The author points out that this constant cycling has more to do with a lack of access to networks and meaningful resources than laziness and an unwillingness to work.

While the path out of poverty is not a linear one, Miller argues that it is a path well-travelled by those in the middle and upper classes, because it is based upon networks. The work of FII and the premise behind The Alternative is to provide the poor with access to networks to create their own solutions to their own challenges. In fact, the work of FII is so focused on the self-determination of their clients that if an FII employee is identified as offering help, no matter how small, they are fired! The goal of the program and this “alternative” approach is to put the power in the hands of the poor; to invest in the work they are already doing and let them lead the way.

By flipping the traditional anti-poverty script, Miller’s FII is showing some very intriguing results. For example, a $2,400 investment in a family over two years, either through matches towards documented savings or scholarships towards school, yields 2.4 times more in average income and 2.1 times growth in assets. When Miller was running a workforce development nonprofit, he would invest far more money per client with a much lower yield rate in terms of income earned and assets accumulated.

The Alternative is chock full of food for thought when it comes to thinking about poverty, philanthropy and the human condition. Its emphasis on promoting self-determination and trust as a platform for poverty eradication over traditional models of support that in many ways promote dependence and distrust is a fascinating and hopeful read. Although I am not a military strategist, it seems that after over fifty years of a particular strategy, it might be time to consider this Alternative if we really want to win the war.