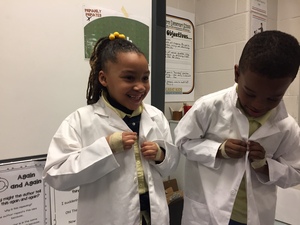 “Science is the way we learn about everything in the world,” wrote one student.  She was responding to the question, “How do you feel about science?” after partaking in the Port Discovery Children’s Museum STEMventures program.  “Port Discovery’s research-based, proven philosophy is that playful, joyful learning broadens children’s horizons, builds their self-esteem, sparks their creativity, and piques their lifelong interest in subjects like science,” explains Bryn Parchman, President and CEO.

The mission of Port Discovery Children's Museum is to connect purposeful play and learning, with the goal to develop smarter, healthier, engaged kids.  Port Discovery is counted among the country's top children's museums and has served nearly five million visitors, or about 270,000 people annually.

In 2016, Port Discovery teamed up with the four Catholic community schools in Baltimore City.  Archbishop Borders, Cardinal Shehan, St. James and John, and Holy Angels Schools serve children in grades pre-K-8 from at-risk neighborhoods.  “Our relationship with these schools is really an extension of our efforts to reach kids in as many low-income, urban schools as possible,” shares Christina McLoughlin, Grants Director.

The Knott Foundation awarded Port Discovery a grant to offer its STEMventures after-school program to students at the Catholic community schools, as well as on-site workshops and field trips.

After participating in five-week program series on themes including primates, nanoscience, and engineering, students from the Catholic community schools showed respectable gains in knowledge.  For example, the percentage of students who knew primates are a group characterized by a large brain, 3D vision, and opposable thumbs grew from 46% to 90%.  And 88% of students identified the correct image of a DNA molecule, a 60% increase from before the program.

Equally as important, the students had fun.  In Nanoscience Exposed, students learned about things too small to see and enjoyed a theatrical performance by New Moon Theater called “Alice in Nanoland.”  The Everyday Engineers session taught about the five main branches of engineering – civil, electrical, mechanical, chemical, and aerospace – and allowed students to perform experiments, build structures, and create the ultimate slime.

Beyond this content area knowledge, Port Discovery strives to create a comfortable atmosphere where children feel they can explore science.  That feeling of comfort starts with the people in the room when the program is happening.  With the same facilitators from the Museum running all of the programs at each school, students looked forward to their arrival and developed strong bonds with them.

These relationships – coupled with the exciting content of each program series – ultimately helped create more positive attitudes about science.  At the conclusion of the program, one student described it best when she exclaimed, “Science is my life!”