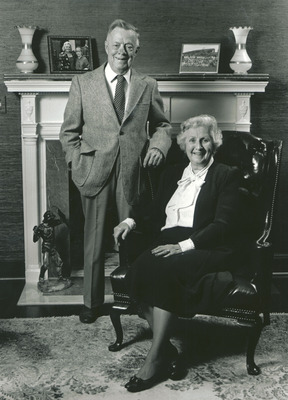 Those who are rich in the world’s goods should not be proud and should not rely on so uncertain a thing as wealth. Let them do good, be rich in good works and generous, sharing what they have.

~ Henry J. Knott, Sr. on his faith and giving philosophy

The children, grandchildren, and great grandchildren of Marion I. and Henry J. Knott inherited their spirit of generosity and giving back to community.  Today, they continue to carry out the founders’ philanthropic legacy by contributing their time and energy to the Foundation that bears the family name.

Henry J. Knott was born on November 2, 1906, the eldest of six boys. His father was a carpenter, working incredibly long hours, a family trait that would most definitely be passed down to Henry. Henry was a mischievous boy, often breaking rules not because he meant to do harm, but rather because he preferred to do things his way.

Marion Isabel Burk was born on April 24, 1910 in Richmond, Virginia. Her mother died when she was four, and her father when she was eleven. She moved to Baltimore to live with her aunt and uncle, where she had a difficult childhood. Her new guardians charged her with many chores, including cooking and looking after the children in a small boarding house run by the family, which may have been a blessing in disguise preparing her for what was to come.

Around this period, Henry and Marion met on a blind date arranged by good friend Matt Lump. Two years later, Henry was taking classes at Loyola College while also spending more and more time with Marion. It was at this point that Henry’s father laid a clear decision in front of him: either put his attention to studying or get married and find a job…

The Knott family was soon multiplying.  First came Mary Patricia and Marion Isabel. Then, Martha Alice and Margaret Celeste. Then, Ann Carlisle, Henry Joseph, Jr., Catherine Philemon, Rose Marie, and Sarah Lindsay.  After Francis Xavier and James Frederick were born, in 1948, the Baltimore Sun, ran a newspaper article about the Knott family, which they nicknamed “The Stork Club.”  The article described the ins and outs of family life with eleven children.  Weekly, they consumed 28 loaves of bread, 84 quarts of milk, 13 pounds of ham, and 10 dozen eggs.

Martin Gerard and Mary Stuart brought the number to thirteen.  The children truly became Marion’s life. They were her job and her social life.  Virtually all of her responsibility and all of her entertainment rested in them.  “My family is my club life and outside interest,” she said.

Sadly, the family lost Carlisle in 1949 to cancer.  She was only thirteen years old.  When the news reached the surrounding area, the Knott home and church were filled with family, friends, and Carlisle’s classmates.  It was a tragic time for the whole family, and especially for Henry.  Perhaps having such a massive family was another blessing in providing so much love to help ease the mourning.

In 1946, Henry developed his first town home on East Federal Street, after which more home and apartment construction jobs followed.  He continued brickwork with contacts from Johns Hopkins and the Baltimore City Housing Authority.  He was the first developer in Baltimore to employ the practice of prefabricating wall panels in a factory, and then sending them out to construction sites.  Projects moved at a blistering pace.  “It was a very efficient, very effective system… he would have two years to build them and he would build them in six months,” said son Henry Jr.

Henry’s business career led him to own significant shares of the Arundel Corporation, for which he was eventually asked to sit on the Board of Directors, which led to becoming Chairman and then President of the company.  During Henry’s tenure, a new General Electric facility was placed in Howard County.  In addition, Arundel worked on a national level, contributing to the construction of the Mica Dam in British Columbia, The Lower Granite Lock and Power House on the Snake River in Washington State, and the underwater tunnel system in New York City.

Before establishing the Knott family charitable organizations that exist today, Henry Knott was heavily involved in private philanthropy, from large donations to small.

There were individual cries for help that he answered.  Once, a young woman came to him and told him about how desperately she wanted to go to nursing school.  She wanted a loan and he gave it to her.  After she finished school, she promptly came to Henry and asked to discuss the terms of repayment, to which he answered, “Just be a good nurse.”

In 1975, Henry gave a monetary gift to Mount St. Mary’s College in Emmitsburg, the largest single contribution in the school’s 167 year history.  1981 saw a $20 million gift contributed by the Knott’s to the Archdiocese of Baltimore, which was also the largest single donation they had ever received.

Contributions of this scale did not go unnoticed, although Henry never asked for the recognition.  Said close personal friend Frank Gunther, “He was just a wonderful example of anybody who really believed in community, who wanted to serve the community, and did so in such a way that he didn’t want a whole lot of recognition. He didn’t want a lot of fanfare.”

According to son Martin Knott Sr., “It was his (Henry’s) intention to take and give all his money, when he died, to charity. So he set this foundation up and part of it was a vehicle to teach his children how to stay involved in the community.”  Since 1977, the Knott Foundation has been doing just that.

Today, the Knott Foundation is run by a “family only” board of trustees.  Family members must be at least 25 years of age, a lineal descendant of Henry and Marion (or spouse of a descendant), and attend a series of orientation sessions before they are eligible to serve.  The Foundation thrives with second, third and fourth generation family members, all actively involved and eager to carry on the philanthropic spirit of Henry and Marion.